My recent adventure in climbing up to Hemkund Sahib – a sacred Sikh temple located on an alpine lake 4300m (about 14000 feet) above sea level – caused me much soul-searching.

Faced with ugly truths about myself, the trip was enlightening.

It would be wonderful if the enlightenment had come in a spiritual form, but it did not.

Instead, as I watched little old ladies, crusty old men, and barefoot pilgrims trudge past me at speeds I could only pray for on the first 13km long, 1300m vertical gain leg of the trek, I realized one, unfortunate and distressing fact. I was, horribly, pathetically, and undoubtedly very out of shape.

I suppose I should have admitted this long ago; whether at Half Dome, marching around with my magic ever-heavier backpack on this trip, or climbing up Table Mountain in Cape Town. However, the excuses always come fast and freely. I was safe and cautious, while others were reckless. I didn’t have enough sleep. My bag was too heavy. I ate too many french fries for lunch. That 45-year-old man was in astonishing, Superman-like shape. Probably better than Superman.

At Hemkund though, I ran out of excuses.

Sure, I hadn’t slept well in three days, what with my 26 hours of bus rides to get to the Himalayas, and the five restless hours of sleep in a cockroach infested room that followed. I was also over-packed, making the idiot decision to bring my laptop with me up the mountain. And of course, there was the fact that we were pretty high up (over 1800m at the bottom of the route.) Yet all of these wonderfully well-thought-out excuses were torn to shreds when a wrinkled old Sikh with a walking stick marched right past me. And then another. And another. Followed by a little old lady. And a couple of kids just for good measure. And then a family of barefoot pilgrims. In the light of overwhelming evidence, I was helpless. I could no longer seek comfort in the arms of my excuses. I was woefully out of shape. It was fact. It was undeniable.

Thankfully, Hemkund Sahib and the Valley of Flowers provided me with more than just a mirror through which to see this harsh truth. In fact, against all the odds, I found myself in the midst of interesting and intense conversations about, of all things, father-son relationships. On my last night in Ghangriya, the last village on the road to Hemkund, I found myself sharing a rent-a-tent with two Indians – one, a Kenyan Indian Sikh, Param, and the other a starving artist with a strong rebellious streak from West Bengal, Utpal. Through our strange and philosophical discussions, I somehow managed to find myself talking about the fathers, pride, and expressions of love. These two themselves already made quite a pair, but with me thrown into the loop, things were just wild – we three really could not be any more different, yet as the night wore on, it was surprising how similar our relationships with our parents were. 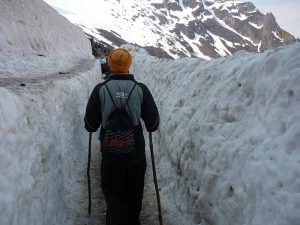 It went beyond just the cliché of Asian parents finding it difficult to express emotions. While it was apparent that there was a strong need for both of them too, even in their forties, prove their worth to their parents, it was the difficult transition from childhood to adulthood and the changing relationship dynamic that it brings that most intrigued me. For in this aspect, in their stories, I found a reflection of my own life. I have consistently struggled, for over a decade now, with how to be a loving, respectful, and filial son while taking on increasing responsibilities of care for my parents. It is a difficult and obstacle-ridden road, one which I don’t know anyone is ever really ready for.

Param’s experience though is enlightening. After his father had a stroke, Param finally found the acceptance for his unconventional lifestyle and career choices that he had always been looking for from his father. In discovering his father’s pride for him, he also opened the doors to understanding his father’s motivations behind actions previously perceived as unhelpful, annoying, or disagreeable. He told me his relationship with both his parents finally changed when he realized that in seeking his parent’s acceptance of his life and choices, he had never truly thought about whether or not he accepted theirs. “Once I accepted them for the people they were – people with dreams and aspirations and stresses just like me – I could finally ask myself the question: what can I do to help them reach those goals, just as I demand they do for me?”

I must be honest; this is not necessarily news to me. The idea, the notion, the logic – these I am familiar with. However, I must also admit that I have found it incredibly difficult to carry out. In this, Param is well beyond me and a shining beacon of light for my own life. If he can find this peace, at 46 years of age, surely, I can do the same.